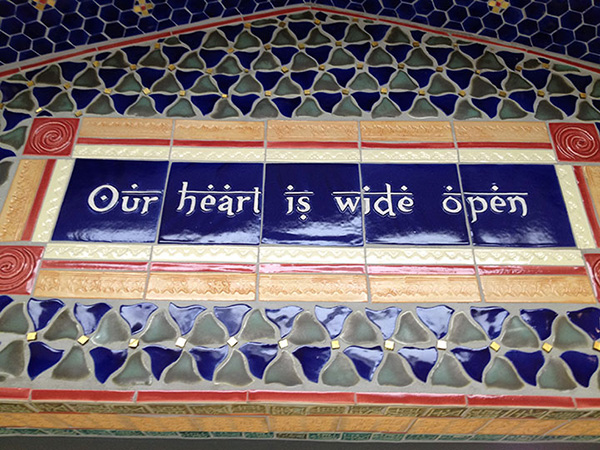 The inscription at the top of the arch - Our Heart is Wide Open - comes from Pope John XXIII’s opening address to the Second Vatican Council in 1962, a turning point in the modernization of Roman Catholicism.

The border around the inscription forms a spiral, a universal symbol of regeneration and life itself. The spiral is commonly associated with Mother Goddesses in a number of cultures, and in modern day Wicca. The white step band and the goldenrod lozenge band were made with 19th century stamps from India, originally used to dye fabrics. 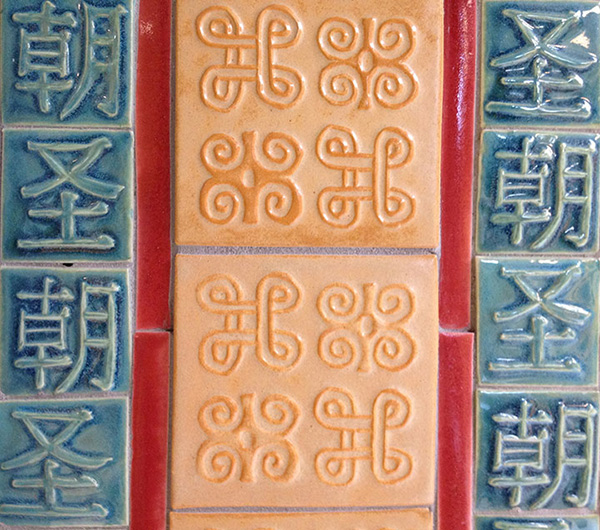 The central square tile on the inside of the doorframe incorporates two Adinkras, sets of symbols from West Africa associated with the Asante tribe in Ghana. The Adinkras are flanked by the two Chinese characters that comprise the word “pilgrimage.”

The goldenrod tile highlights two Adrinkas. The knot-like Adinkra, a Mpataop, represents the unity of groups previously in conflict, and thus expresses hope for religions today locked in conflict. The second Adrinka, a Dwennimmen or ram’s horns, symbolizes strength combined with humility: Rams fight ferociously but also submit in humility to sacrifice. The Mpataop also appears in the Peace Labyrinth on the Prep campus. 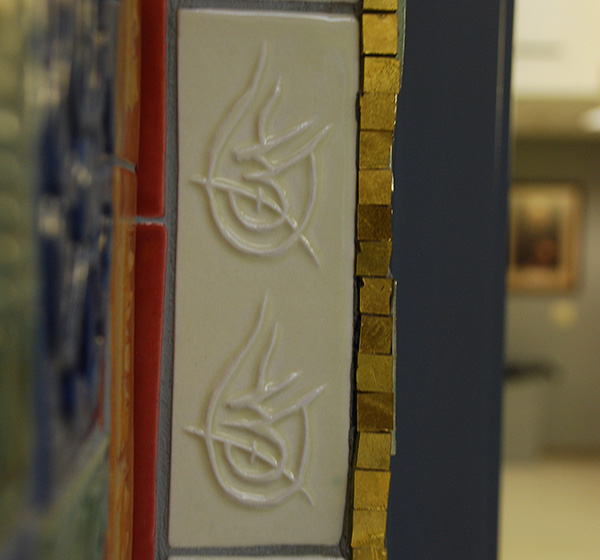 The cream-colored tile carries a calligraphic form of the Arabic word for “pilgrimage.” The small gold cubes to the left are Venetian gold glass smalti, the same mosaic cubes used in Byzantine mosaics. 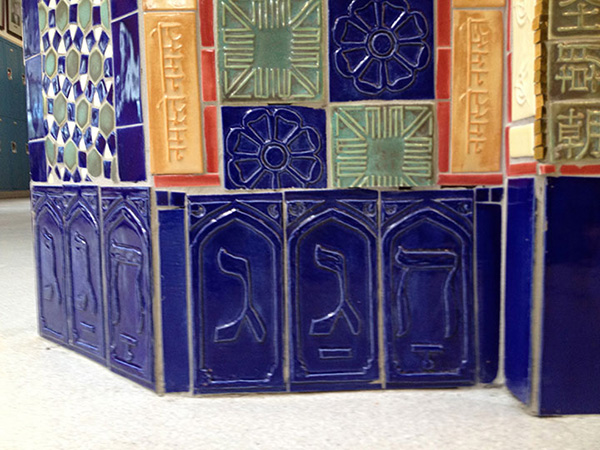 Large Hebrew letters at the base of the arch spell the word chagag, meaning both to celebrate and to make or keep a pilgrimage. These panels are larger than others and placed at the base of the design because Hebrew Scripture is fundamental to both Christianity and Islam. 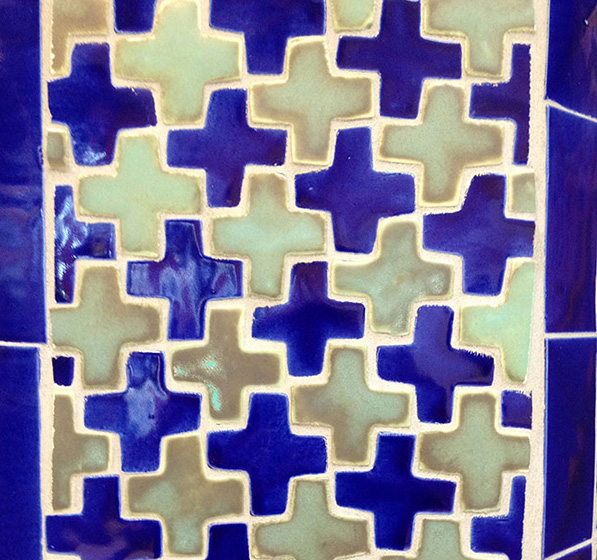 Some of the designs in Pilgrims Way were drawn from Islamic art and related sources. These crosses come from sketches of Islamic tiles drawn by artist E.M. Escher while he travelled southern Spain the 1920s. Many of his famous geometric designs were inspired by Islamic art.  Left photo shows Escher’s sketch and the right photo shows the pattern in Pilgrims Way. 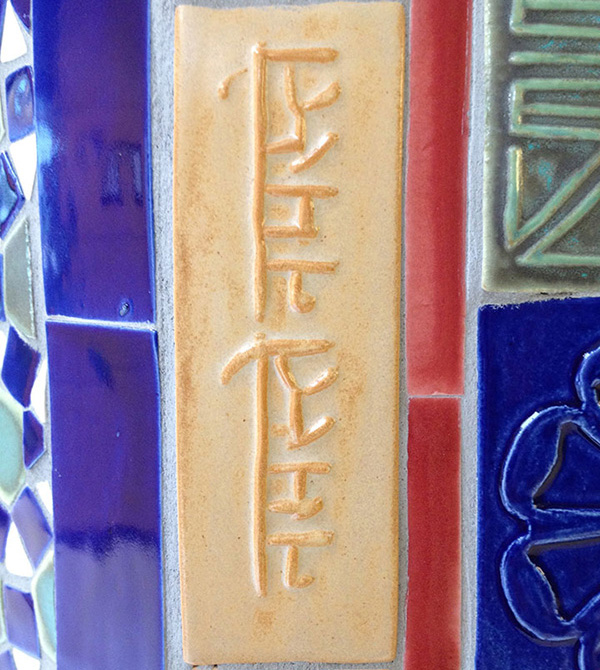 Namaste, familiar to many in contemporary Western world as part of meditation and yoga practices, is a greeting among Hindus and Buddhists. The salutation is said while placing palms together in front of the chest and bowing one’s head. Suitable in any company, namaste literally means “I bow to you.” Combined with the gesture, the meaning becomes “may our minds and hearts meet.” As a spiritual expression, it acknowledges and honors divinity in the other. Bowing to another’s understanding of divinity is a form of prayer. 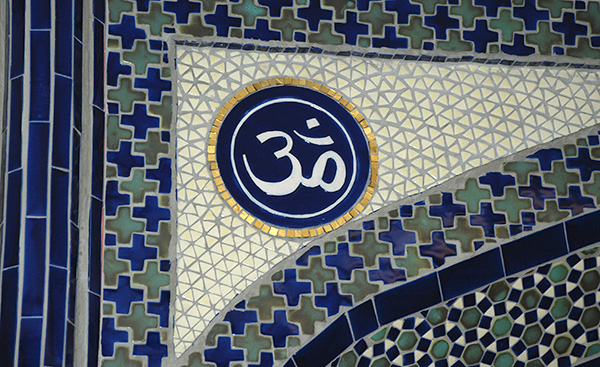 With the exception of the cross, the omkara is probably the most recognizable from today’s culture. It has become a visual cliché, evoking thoughts of meditation, Zen Buddhism, and yoga. This popularity belies its profound meaning in Hinduism and Buddhism. Inscribed within the iconic Sanskrit characters are the three states of human consciousness and the transcendent nirvana: the ultimate oneness that lies beyond human knowingness. 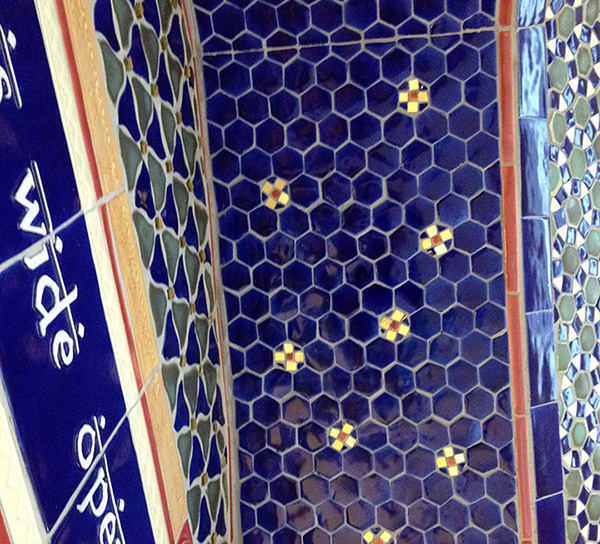 Forty stars are arrayed across the upper intrados, a symbolic number evoked in the epic and transformative journeys relayed in the scriptures of Judaism, Christianity, and Islam. The Israelites wandered 40 years through the desert before arriving at the Promised Land. Moses and Mohammad spent 40 days in contemplation. The Lenten season lasts 40 days. The use of gold stars against a blue sky is a universal symbol for the “vault of heaven” used across cultures from ancient Egyptian tombs to Christian cathedrals. 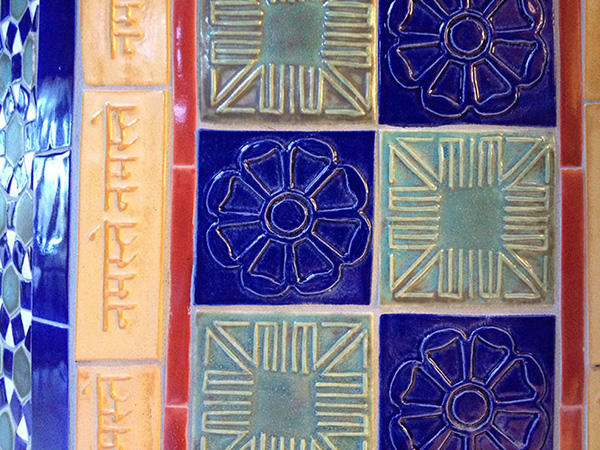 Inside the arch, a detail from the seal of the Xaverian Brothers, the blue floretre tile (“in harmony small things grow”) alternates with the green Kufic tile. Kufic is an early, geometric form of Arabic. This Kufic design is drawn from the logo of the Aga Khan Award for Architecture, created by Karl Schlamminger, a German Muslim. The design forms an ambigram, or calligraphic palindrome, using the word “Allah” eight times. The type of square Kufic used here was typical of the 9th century. The two alternating motifs here echo patterns used in the home of Jacob Spring (now the Prep’s Administration Building).