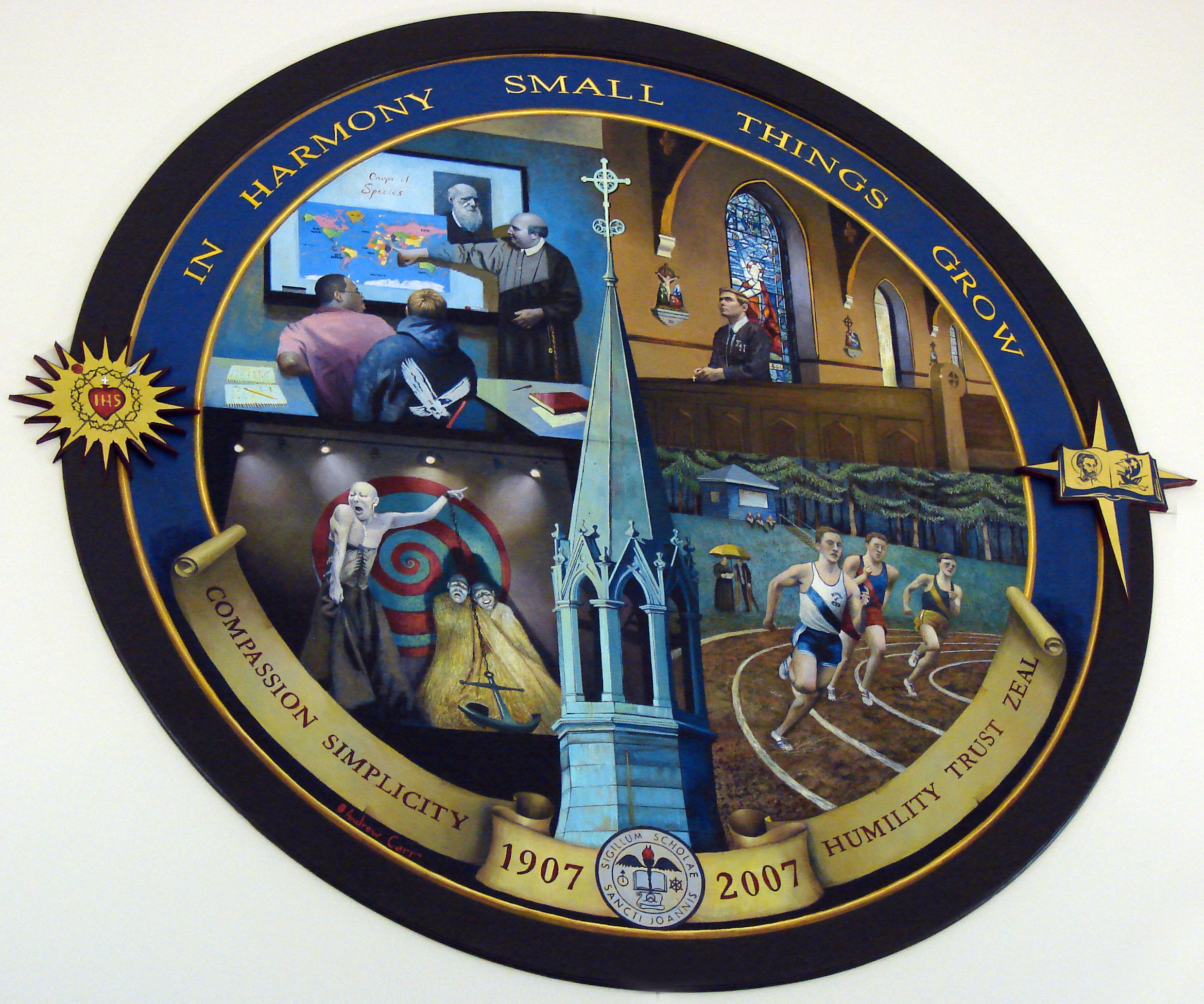 In celebration of the Prep's Centennial year, Andrew Carr '02 painted a soaring mural in the main reading room of the A. E. Studzinski Library.

A bold nine feet in diameter, the oil on canvas piece depicts 100 years of Prep life. The artist divided the piece into four sections, representing religion, athletics, the arts and academics - the essential elements of a Prep education. Each of the four sections is achored in a different time period, and seen in sequence, they form a cinematic timeline that opens in 1907 with the founding of St. John's.

The narrative begins in the chapel, a tribute to the Prep's foundation in faith and to the spirituality of the Xaverian Brothers. For athletics, it moves to the 1940s and '50s, when St. John's boasted new sports facilities and its reputation as an athletic powerhouse was widely acknowledged. A production of Shakespeare's "The Tempest" introduces the 1980s and '90s, when the Ryken Center for the Arts opened and the fine arts curriculum expanded. A thoroughly modern classroom, where teacher and students embody the Prep's tradition of rigorous academics, represents the present time.

Before he began painting, Carr spent time researching Prep history. Much of what he learned found its way into the mural. Intrigued to find that fraternities played a big role in life on campus for many years, for example, he added a small Sigma Nu insignia to the jacket of the student pictured in the chapel. And knowing that there was no money for stained glass windows when the chapel was built, he pictured plain glass in some of the windows. These and other small hints about the Prep's past add layers of meaning to the painting, whether it is the rainy track scene that underscores the endurance and commitment of Prep athletes, or "The Tempest" that represents an edgy, experimental approach to the arts. 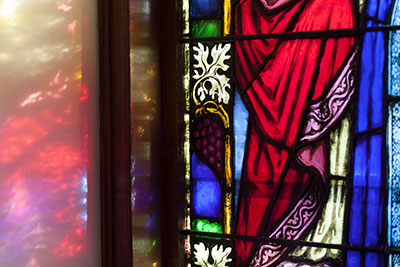 Brilliant stained glass windows have enhanced the beauty of the chapel at St. John's since the 1930s and '40s, when they were installed, thanks to the generosity of families long associated with the school. The beautifully rendered windows depict religious scenes, as well as the seals of the Xaverian Brothers seal and St. John's Prep.

In celebration of our Centennial in 2007, a new Impressionist-style stained glass window was created for the space above the main entrance of the A. E. Studzinski Library. The nautilus-like design represents the courageous journey of the first Xaverian Brothers who came to the United States to pursue their ministry in education. 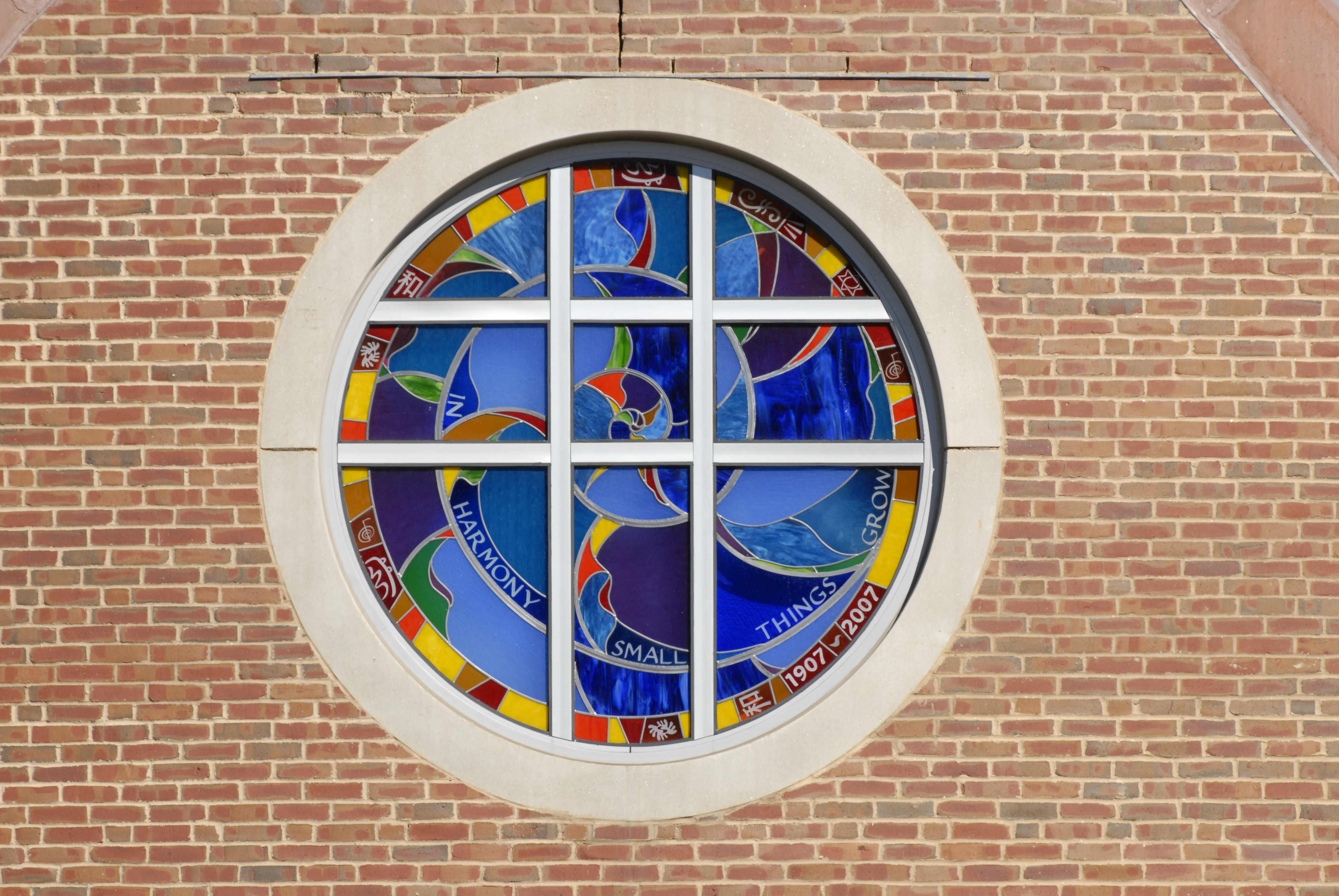 Students in printmaking and clay sculpture classes collaborated with the Fine Arts faculty to create a mosaic installation piece for the exterior of the Ryken Center for the Arts.

Designed to celebrate the Prep's Centennial year, the bold mosaic panels depict images of the art that goes on inside the building and reflect the creative energy that enlivens the space every day.

Printmaking students designed linoleum cut blocks with images of the arts - everything from a trumpet, paintbrushes and sculpture to a camera and actors on stage. Sculpture students then used the linoleum cuts to make colorful ceramic tiles and set tiles into large panels. Shiny bits of glass and mirror incorporated into the grout and sparkle in the sun.