When Albert J. Shannon, Ph.D. was named the 15th headmaster of St. John's, he became the first Catholic layman to hold the position in the history of the school. His wife Mj made her own mark with her active involvement in the life of the school and in the Danvers community. Also in 2001, the Prep received a $5 million gift in support of academic and facility initiatives. It is believed to be one of the largest non-estate gifts ever received by a New England Catholic School.

In September 2002, the Prep celebrated its 95th Anniversary with a gala evening that brought alumni, families, faculty and staff together on campus. Brother Arthur Caliman, CFX, then Superior General of the Xaverian Brothers, accepted the Spire Award on behalf of the Congregation.

The A. E. Studzinski Library and Ozzie Technology Center opened in September 2003 and at the same time, Brother Benjamin Hall was remodeled with six new science labs, the Ford Family Counseling suite and new academic department offices. The two facillities - and the entire campus - are equipped with wireless Internet access and sophisticated technology resources to meet the needs of today's students and faculty. 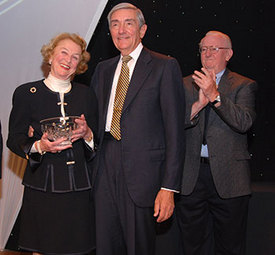 September 2007 marked the beginning of the Prep's Centennial year with events and programs throughout the year. New spaces were created and new artwork was installed on campus to mark of our Centennial in a lasting way, including the DeSimone Family Garden, a time capsule to be opened in 2028, a Centennial mural, a stained glass window, and an mosaic art installation.

Virginia and John Kaneb, whose six sons graduated from St. John's, received the Spire Award at the gala Centennial celebration in September 2007. Brother Edward Keefe, CFX, who served as headmaster from 1974-1989, was on stage to present the award, which is the highest honor given to a non-alumnus of the school.

The Brother Linus, C.F.X Athletic Commons, a five-acre multi-purpose turf field was dedicated in April 2009 after a $5 million campaign. The Commons includes the Hall of Fame Circle, the Class of 2011 playing fields, a baseball field, and a field for soccer, football and lacrosse.

Edward P. Hardiman, Ph.D. succeeded Dr. Shannon in June 2011 after serving for eight years as principal at St. John's. He is a graduate of Fairfield University and earned his doctorate at Boston College. Keith A. Crowley, Ph.D. was named to succeed Dr. Hardiman as principal.

An exciting new chapter in Prep history began in May 2013, when plans for Prep 20/20 were announced. The strategic initiatives outlined in Prep 20/20 were realized with the opening of our Middle School with grades 6, 7, and 8; the addition of the Brother Keefe, C.F.X Academic Center; and the new Leo and Joan Mahoney Wellness Center, which includes the Dianne and Ray Carey '67 Field House, the John A. Driscoll '90 Aquatics Center, and the Joseph R. Levis '60 Fitness Center