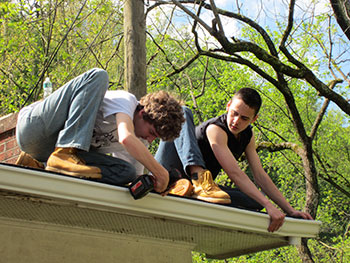 In 1980, enrollment reached an all-time high, surpassing the 1,000 mark and causing a much more competitive admissions process. With 211 students, the class of 1980 was the first to graduate more than 200 young men.

The 1980s marked the continuation of an impressive string of "championships" for the  Drama Guild under the direction of Brother Ron Santoro, C.F.X.

Brother William Drinan, C.F.X. succeeded Brother Keefe in 1989 as Headmaster, and initiated plans for the "Building on the Prep Experience" campaign. As a result of this $3 million initiative and strategic plan, the fine arts curriculum was expanded during the early 1990s. In 1995, Ryken Hall was renovated into Ryken Center for the Arts for with instruction and performance space for theater and music, as well as art studio and gallery space.

The 1997 football team completed the Eagle's first eleven-win season, including a dramatic Thanksgiving Day victory over Xaverian and a "Super Bowl" championship. Also in 1997, Prep students traveled to Buchanan County, Virginia, for the first time to help repair homes in the area. More than ten years later, the Prep enjoys a warm relationship with local residents, and the annual Virginia trip is an expression of the Prep's commitment to service.

When Jared Monaco graduated in 1998 - just after the school's 90th anniversary celebration - he became the Prep's 10,000th alumnus.

In the 12 years that Brother William Drinan served as Headmaster, he saw religious studies restored as an academic requirement, unparalleled athletic successes, and a revitalization of the lay-Xaverian partnership that is the hallmark of Prep excellence...>>