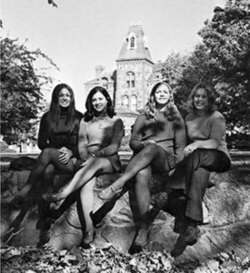 The tumultuous times of the 1960s saw change at the Prep. In the early 1960s, the school's first capital campaign funded the building of Brother Benjamin Hall and Alumni Hall, completed during the 1964-65 school year. On May 22, 1965 - fifty years after the dedication of Ryken Hall - Cardinal Cushing dedicated the two new buildings.

During this era, St. John's expanded the course offerings and created an independent study program. Another important change was increased athletic spirit. The 1967 and 1968 football teams were Class B State Champs. These two championships marked the beginning of a new age for Prep athletics, which soon added soccer, swimming and other programs that continue to foster success and pride.

The early 1970s also saw an end to the suit coat and tie dress code, with St. John's opting for a more casual attire.

Changes continued at St. John's during the 1970s. Perhaps the most unexpected development occurred after two North Shore Catholic schools closed, and the Prep accepted young women. A short-term decision, urged by the parents of the male students, turned into a wonderfully enriching experience which concluded in 1977 and resulted in our seventy-seven alumnae. Many alumnae "legacies" have gone on to attend the school.

During the late 1970s, the first official Alumni Office was staffed to maintain strong contact with our many alumni. The Development Office was also formed to help create support for school through alumni, parents, and friends. Read on for more history...>>