<Back to News
Embracing their Best Selves

St. John’s Prep students took the chill out of winter break with the warmth of their hearts

In a world that’s getting smaller, burdened with problems that are more complex, and all of us more dependent on each other, more than three dozen members of the St. John’s Prep community traveled near and far this month, opening their hearts and minds to transformational encounters with a diversity of people and experiences. With resounding success, three service initiatives during February break inspired a sense of unity, collaboration, and connectedness between the road-tripping Eagles and the communities they journeyed to serve. 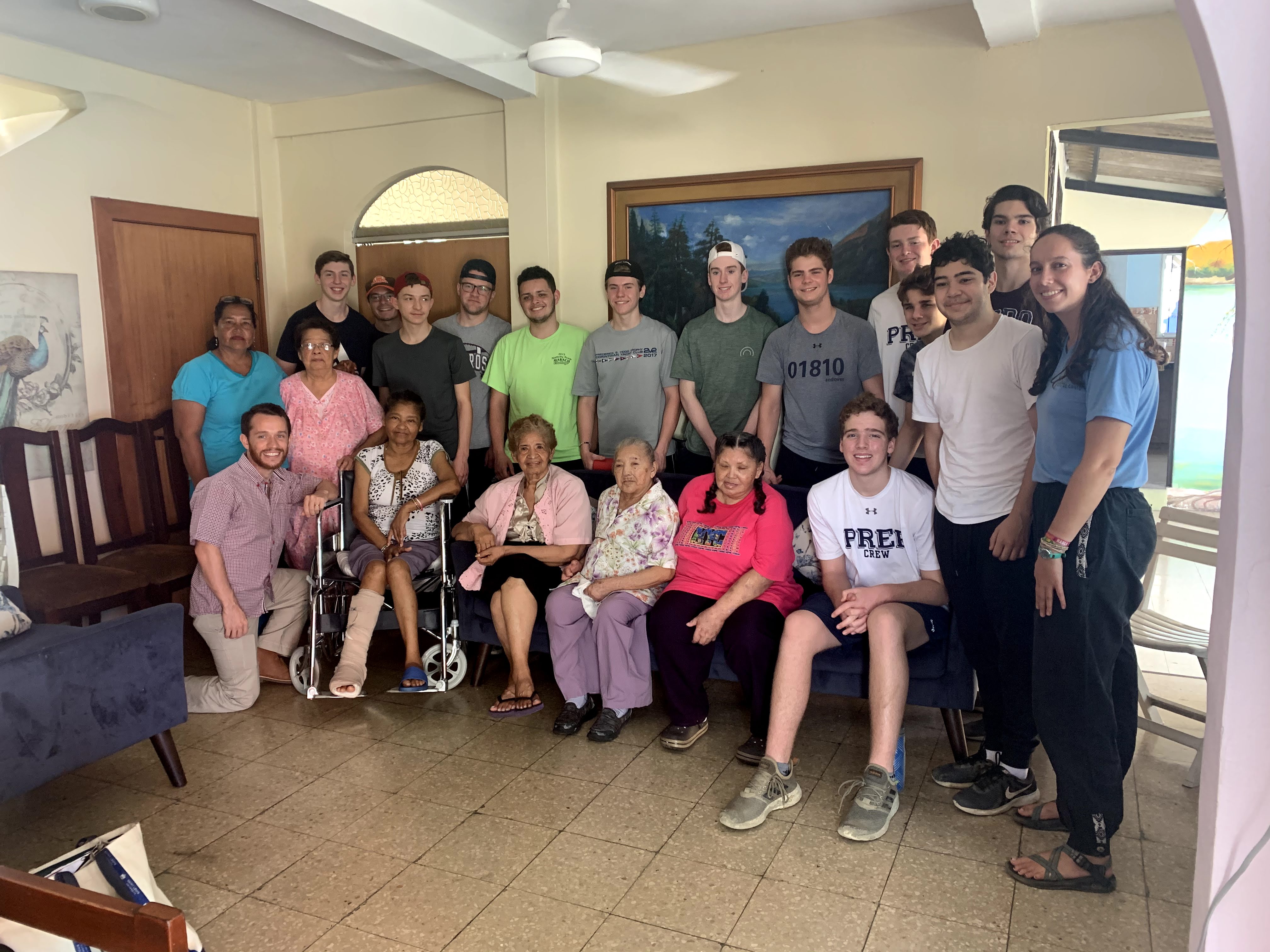 In Ecuador, an immersion retreat program called Rostro de Cristo provided students with an opportunity to assimilate into the local community. “The students visit residents’ homes, play soccer with local kids, go to Mass and live exactly as locals do,” says Lawrence Molloy, the Prep’s director of campus ministry. “They get a banana and some bread both for breakfast and lunch, and vegetables and rice for dinner. It’s a real cultural awakening as they explore the intersection of faith and justice.” This year’s visit included 11 students chaperoned by school counselor Declan Foley ’11 and campus minister Jeff Hatgas.

The Prep delegation met local neighbors, visited service organizations, and built relationships with the volunteers who hosted them. The immersion program offers students an opportunity to participate in the reality of many Ecuadorians as they touch, taste, smell, see, and feel how the day-to-day of people living in lean economies. Oftentimes, Prep visitors are forever changed.

"There were characteristically striking moments of any immersion trip experience,” said Foley. “Eating unfamiliar foods, speaking in an unfamiliar language, intimately experiencing abject poverty, long days, nightly reflection. But I was struck more so by the smaller moments of the trip like when a neighbor welcomed all 13 of us into their home because rain showers were moving in. Once inside the two-room house, we were moved to a space that would be cooler with softer seating arrangements. Our hosts passed around their family scrapbook full of previous volunteers that had been to their house. And I’ll never forget seeing a mother slip money she didn’t have to her daughter so she could go buy us a Dixie Cup each of soda to drink.”

The Prep has strong alumni connections with both Rostro de Cristo (it means the Face of Christ). Father James Ronan ’62, who is pastor of Saint Catherine of Siena and Saint Mary's Parishes in Charlestown, founded Rostro de Cristo in 1988 as a retreat center where high school and college students from the United States could live in community with the people of Ecuador.

“I think in those smaller personal connections and human relationships, our young men opened their hearts and minds to the different worlds around them,” Foley added. “I think these moments will stay with them, and my hope is that they leverage them to make positive impacts in their own communities, both domestic and abroad.” 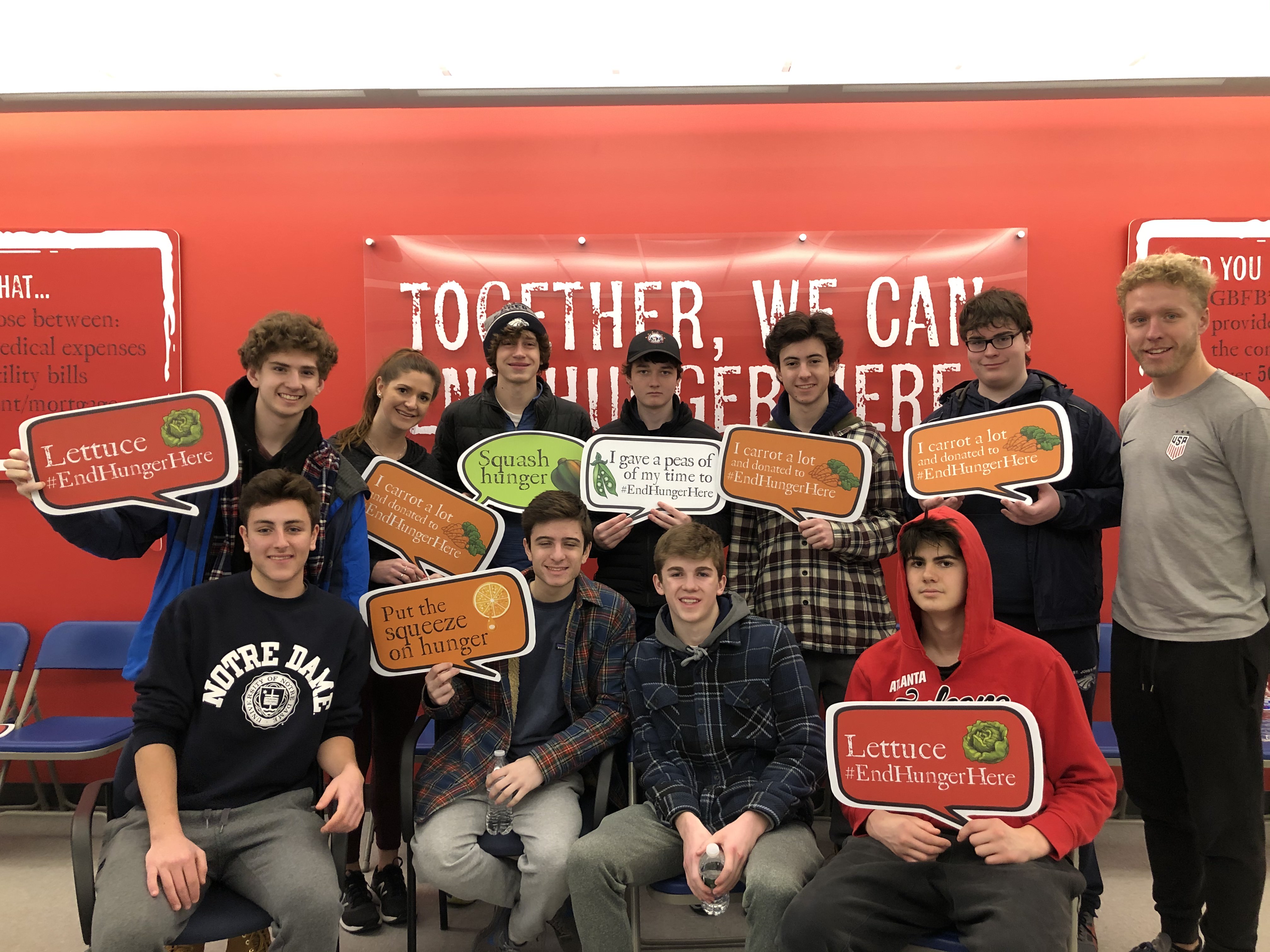 “I think we all enjoyed cooking and sharing meals with those who are less fortunate,” said Allis, who helped lead nine Prep students on the trip. “Highlights were that feeling of being productive and making a difference while working at Community Servings, the Greater Boston Food Bank, and Daily Table as well as the Boston Rescue Mission. Seeing the joy clients experienced from our visit at the United Cerebral Palsy Center was heart-warming. It was really humbling to see our modest contributions so thoroughly appreciated.”

Camp Sunshine in Casco, Maine is for infants to 18-year-olds who have, or have had, life threatening illnesses. This year, 10 St. John’s students served as volunteer counselors. Math teacher Liz Dobrowolski, the Prep’s 2018 Ryken Award winner, led the trip along with math teacher Yong Yoon, while German teacher Chris Lynch came along to pitch in.

Prep volunteers split up to serve campers from ages six to eight and nine to 12 as well as the “Tot Lot,” comprised of three to five-year-olds. The role of counselors included food service, manning arts and crafts stations and monitoring activities at the camp’s sports center. Since its inception, Camp Sunshine has offered comfort, hope, and support to over 50,000 individuals from all 50 states and 27 countries. The families who come to Camp Sunshine have children diagnosed with cancer, a brain tumor, some hematologic conditions, renal disease, systemic lupus erythematosus, and those who have undergone solid organ transplantation.

When a child faces serious illness, the entire family is impacted. Camp Sunshine’s mission is to provide respite and support to each family member—children, siblings, and parents. Recreational activities allow children and adults to relax and enjoy the simplicity and beauty of life along the shores of Sebago Lake. 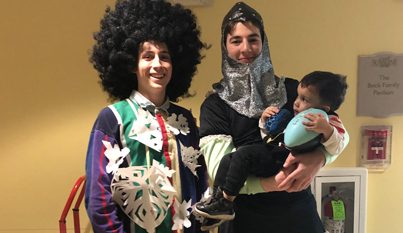 “We had an awesome week,” said Dobrowolski. “Pat Hosman ’21 was placed in the Tot Lot and helped a little boy stop crying from Day 1. The arts and crafts lead counselor, whose son has cancer and was attending for the week, had nothing but glowing praise for how helpful Colby Crews ’22 was all week. Luke Arsenault ’20 was in a talent show act with a camper where they passed footballs to each other simultaneously 30 times in a row. The camper told Luke he was like his brother.” Sam Poulin ’20 was in a couple talent show acts. One where he was a backup dancer for a girl singing ‘Let it Go’ from Frozen.”

Other activities at Camp Sunshine included ice skating, snowshoeing, horse-drawn carriage rides, sled dog rides (by a mush team of German shorthaired pointers), cookie decorating, basketball, and much more.
“Camp Sunshine is a place where parents can relax for one moment and trust their kids are in good hands,” said Dobrowolski. “Our students commented multiple times that you can’t even tell which children are ill because all the kids are treated equally, and they’re all just being kids when they are playing and having fun. For some siblings of those afflicted, it’s a rare time when they get as much or more attention as their sick brother or sister. There’s a big emphasis on treating everyone equally.”