<Back to News
#PREPpeople: Paul McNamara '69 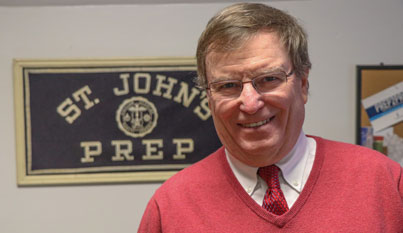 Name a teacher, mentor, coach, or classmate who inspired you: “Brother Linus because he got to know everybody on campus. Later as my ice hockey coach and when I worked at Camp Christopher, he became a great mentor.”

Which of the five Xaverian values—humility, compassion, simplicity, trust or zeal—speaks to you most and why? “I can’t imagine any of those not resonating with me. How do you choose among those qualities?”

Do you remember if there was a cultural trend back when you were a student that everybody was in to? “Growing your hair long, for sure.”

What music were you listening to when you were a student here and on what kind of device/format? "We listened to records and the radio. I was a big Beatles guy, but the first concert I went to was a Rolling Stones show at the Boston Garden that the Prep sent a student bus too. The student activities council brought in a popular band of the era called The Left Banke, which played in our football stadium. They had a Top 10 billboard hit called 'Walk Away Renée.'"

If you had to pick one dimension of your SJP experience that’s stuck with you to this day, what would it be? “I think it’s the friendships you form. You meet and form friendships with all these kids as a 13-year-old from all over the region instead of just your own hometown.”

What’s your favorite part of connecting with Prep alumni every day? “Same as above. Interacting with graduates from all different classes—not just my own—and tapping into that expanse of Prep pride and spirit.”

If you could give a Prep student just one piece of advice, what would it be? “Don’t ever burn a bridge in whatever you're pursuing, personally or professionally. You never know what’s right around the corner.”

Fun fact: "I went to Woodstock the summer after I graduated from St. John’s."