<Back to News
Building a Legacy of Change 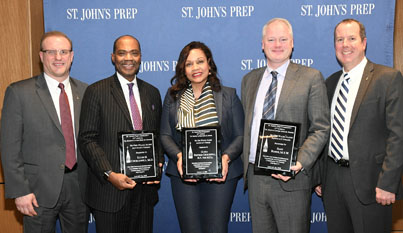 On Thursday evening, St. John’s Prep proudly recognized a trio of accomplished advocates for the advancement of social justice and equality. In unique and powerful ways, all three—children’s author Gloria Respress-Churchwell, Boston Children’s Hospital President and Chief Operating Officer Kevin Churchwell, and social worker Sean Burke—have been role models and agents of change within and beyond the Prep community. During the school’s 11th annual Martin Luther King Jr. celebration, each of them received the School’s No One Walks Alone (N.O.W.A.) Advocacy Award, which recognizes a member of the extended Prep community who has embodied King’s pursuit of social justice by creating opportunities for change.

Speaking to a gathering of students, parents, faculty, and staff during a ceremony celebrating the occasion, Headmaster Edward P. Hardiman, Ph.D. noted, “Dr. King walked with those on the margins and the unjustly persecuted. In his ministry, he committed himself to being a man of faith who sought to provide hope by taking direct action. Tonight’s honorees embody that spirit and that mission.”

A nationally renowned author of nonfiction children’s literature focusing on society’s unsung heroes in the fight against injustice and inequality, Respress-Churchwell earned an M.F.A. from Simmons University as a Lee & Low and Friends Scholar. She has been passionately involved in shaping and supporting programming at St. John’s Office for Multicultural Affairs and Community Development (MACD). She and her husband, Kevin, are the parents of two St. John’s graduates—John ’17 and Arthur ’15.

Now in his fifth year serving on the Prep’s Board of Trustees, Dr. Kevin Churchwell has played a critical role in the school’s framework for maintaining and further elevating diversity and inclusion within the campus culture. A graduate of MIT and Vanderbilt Medical School, Dr. Churchwell, who is also an associate professor of anesthesia at Harvard Medical School, was CEO for large children’s hospitals in Delaware and at Vanderbilt University Medical Center, prior to joining Boston Children’s.

Headmaster Hardiman lauded Respress-Churchwell for her ability to “share the struggle for civil rights in a way that young readers can relate to,” and praised Dr. Churchwell as “a tremendous voice of reason, hope, and advocacy (whose) insights and wisdom have led to significant work and decisions by our board.”

As Director of Investigations at Courtside Legal Investigators, Inc., Andover’s Sean Burke is continuing a three-decade career of protecting the rights of victims and defendants. Equipped with a degree in criminal justice and a master’s in social work, Burke, who now runs his own legal support business and whose son attends St. John’s Middle School, spent most of his career as both a child advocate and providing court-appointed social work services to repeat offenders. His success at developing techniques, interventions, and empowerment tools to prevent recidivism is eminently worthy of recognition, according to John Sears, one of multiple folks to nominate Burke for the award.

“Sean evaluates each client and re-humanizes the individual by coming to understand their personal history,” said Sears, a 2008 graduate of the St. John’s and an associate at Gerson Lehrman Group. “Many of Sean’s clients have been homeless, and he’s helped them obtain housing, federal and state benefits including healthcare, employment, counseling, drug and alcohol treatment, as well as implement innovative methods for avoiding high-anxiety situations. Sean breaks through those barriers and has impacted many lives beyond those of his clients.”

“These three people represent the legacy of change across generations,” added Raisa Carrasco-Velez, the current director of MACD at St. John’s. “Each in their own way, they have carried on the work Dr. King began. They have also been instrumental in inspiring students to take the lead for the next generation. It is today’s students who will continue this work in their own lives, whether it’s in business, education, or non-profits. That is Dr. King’s legacy.”