<Back to News
#PREPpeople: Gary Smith 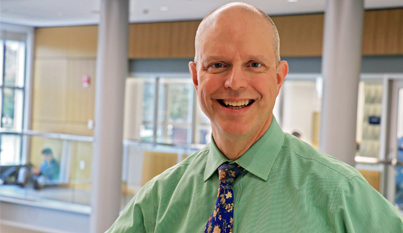 DESCRIBE A TEACHER WHO INSPIRED YOU GROWING UP: “I have two stories there. I probably owe my life to Mrs. Ross in third grade. My family followed my father’s corporate promotions eastward from Cincinnati. I spent first and second grade in Long Island, New York, in classes with 40 kids. I got lost in the shuffle. I learned zero math; I didn’t go looking for math and it didn’t come looking for me. Mrs. Ross could tell I would be best served by someone who kicked me into gear. None of my avoidance tricks worked with her. She made me realize that you can’t get any place good without working hard at it. In college, I had (the late) professor Stephen Bodor from the mechanical engineering department and I had him for multiple semesters, and we were so lucky, as physics majors, to have him. We took more math than the engineers, and he had such an incredible sense of humor. He had this fantastic way of explaining math, and always in context. It was a perfect fit for us as science people because we were learning how the science worked, and he would teach us the math alongside that. I’ve seen teachers to that here, too. He was a tennis pro, a veteran of two wars, he had a ton of great stories about life, and he was a master teacher.”

WHAT MADE YOU WANT TO WORK AT A SCHOOL FOR A LIVING?: “I figured it out in my senior year of college when I looked at the possibilities for a career right in front of me was graduate school—and I was looking for a break from the intensity—so I started to look at Catholic school teaching. For both my parents, the church was a big part of their life. I grew up singing in the women’s choir in our church as a soprano until I eventually became a tenor. The idea of teaching in a school where it was possible to blend ‘what do we care about and why?’ with the issues of how the science works. That was more in keeping with how I thought the world made sense to me. And it’s even more so today. I think schools like this one are a lot of what the world needs right now. The orientation toward compassion married with a rigorous understanding of how the world operates is exactly what we need.”

WHAT EXPERIENCE OUTSIDE OF ST. JOHN’S INFORMS YOUR WORK WITH STUDENTS AT THE PREP?: “A couple of things. I’ve learned a lot about students through having my own family. Seeing the growth of human development and how it takes so many small things working together to have a kid develop into a happy, healthy person, it really makes me appreciate how hard it is in a school setting to do all those little things well. St. John’s is a place where people really try. The Xaverian Brothers say, ‘In harmony, small things grow,’ and I think that’s such an important observation about the way people develop. I think being a part-time athlete has helped a lot too. I’ve talked to my fellow teachers about what they themselves have learned from sports. That’s been true for me. I was never great, but I bike-raced a lot when my kids were small. Some sports are a straightforward chance to test your preparation against other folks who are working hard too. Also, in biking racing, there’s no place to hide.”

WHAT DO YOU LOVE THE MOST ABOUT WORKING WITH YOUNG PEOPLE EVERY DAY?: “So many religions have a notion similar to this: That inside of every student, there’s this sense of unbounded potential. I think that fits so nicely as a teacher to stay aware of the fact that not only do we not know the value of a student, we could never know the value of a student. They all are immeasurably valuable. I think if you approach kids in that way, that’s a prayerful place to come from—maintaining this sense that students are capable of so much. Of course, we want to keep our approach realistic as teachers, but also we never want to let students settle for believing they’re less than they can be.”

FUN FACT: “I was supposed to be on the cover of Popular Mechanics magazine playing basketball with (1976 Olympic Decathlon gold medalist) Caitlyn Jenner. Our immediate neighbor worked for an ad agency and Popular Mechanics had a project to try to build a driveway basketball hoop that you could set at different heights. Ultimately, we didn’t make the cover, Jenner appeared solo, and we got bumped to the inside of a later edition of the magazine. But yes, I got to shoot hoops with Jenner for a few minutes in 1977.”