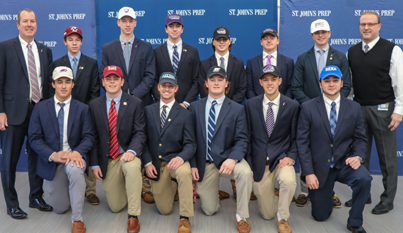 Today, November 13, marks the first day Class of 2019 student-athletes can officially commit to a collegiate destination by signing a National Letter of Intent (NLI). Congratulations are in order for 12 Eagles who have made a written commitment to compete at the next level. Below, this fall’s St. John’s signees are grouped by sport with a comment from their head coach at St. John’s. More photo on SmugMug.

“What a great day and a remarkable accomplishment for all 12 of our student-athletes, their families, teammates, and coaches,” said St. John’s Prep Athletic Director Jameson Pelkey. “These signings are a testament to all of the time, energy, and effort that our guys have put in over the years. We congratulate them and wish them all the best.”

Ryan Bradley (3-1, 0.69 ERA, 1.10 WHIP, .149 OBA in 2019): “Ryan had a tremendous Super 8 Tournament with multiple key outings, and next fall, he’ll join former Eagles teammate Alex Lane at Bryant. He’s as competitive as you can possibly get, and he’s also had a successful ice hockey career here.”

Joseph Castrichini (1-0, 2.10 ERA .825 WHIP, .184 OBA in 2019): “Joe will join former Eagles teammate Brendan Powicki at Stonehill College. He has been a consistent pitcher for us and will continue to get batters out at the collegiate level thanks to his variety of pitches.”

William Frain (.342 BA, 18 RBI, .421 RISP in 2019): “Will led the team in doubles and triples he’ll join former teammate Frank Diorio out in Amherst. He’s a great teammate and a tremendous leader in our program.”

Matthew Remley (3-2, 1.29 ERA, 1.20 WHIP, .149 OBA in 2019): “Matt will join former teammates Andrew Selima and Chris Rassias up at Holy Cross. He projects well at the college level. He’s a very good high school pitcher, but he’s going to get even better at the next level.”

Richard WIlliams (.309 BA): A three-year varsity performer in our outfield, Rich’s 2019 season was cut short due to a broken collarbone. He has rolled up his sleeves and put himself in a position to be a D1 college player thanks to an incredible work ethic. It will be great having him back in our lineup this spring."

Jackson Klein (5-8, 175): “Jackson is a two-year member of the varsity team. Last season, he recorded three points (two goals, one assist), picked up 23 ground balls and forced 10 turnovers. He’s an aggressive long stick midfielder who has the ability to put the ball on the turf, pick it up and push into the offensive zone in transition. We’re excited to see Jackson continue his career at Furman University next year.”

Zach Davis (5-8, 150): “Zach scored six goals, passed for eight assists, and was named Catholic Conference Player of the Year this fall. He has twice been named both a Catholic Conference and Eastern Mass All-Star. A two-year starter, Zach is a dynamic, skilled player whose strengths are his dribbling skills and ability to see the field. He’s unselfish and works tirelessly on both sides of the ball. I, for one, wouldn’t be surprised if he’s in the starting 11 for Stonehill’s 2020 season-opener.”

Steven Jackson (5-8, 128; two-time Catholic Conference All-Star and 2019 conference MVP): “Steven has been a model of consistent effort over his four-year running career. His commitment to the daily rigors of practice have allowed him to actualize his talent. He’s been a ferocious competitor both in cross country and track. As one of our captains, he sets a great example. He’s quick to laugh and enjoys everything involved with being one of the leaders of a high-caliber running program.”

Connor Hughes (Middle distance/distance; 6-foot, 145): “Connor has been a consistent and dedicated leader on our team, and he’s a critical member of our relays. I know he has high expectations for himself this winter and spring, and I can’t wait to watch him perform. We’re talking about a three-year All-State qualifier in cross country as well as an individual and relay qualifier in winter and spring track as a junior. He owns PRs of 2:01 in the 800-meter run, a 4:29 mile and a 16:35 in the 5K.”

Xavier Ghazaleh (5-11, 180): “Before deciding to compete exclusively at the club level, Xavier was the top performer in our Epee group during the 2018 season, compiling a record of 33-6. At the state championships that year, he helped the team to a third-place finish, overall, and anchored the Epee squad to a first-place finish, capturing the silver medal in the individual competition. Xavier is a consistent national-level fencer and currently ranks No. 84 in USA Fencing’s national Under 20 point standings and he’s tied at No. 115 in the Senior rankings.”

“Xavier has been an absolute pleasure to coach,” says Adam Maczik, Ghazaleh’s current coach at the Marx Fencing Academy. “His dedication and perseverance have been a model for other fencers and a source of strength throughout his career. I am excited to see him continue his fencing career at Duke University and beyond. Xavier has competed with the U.S. national team in three World Cups: the Coupe du Monde in both Austria and in Latvia, and the Coupe du Danube in Slovakia. He has also qualified and competed in the Junior Olympic Championships since 2014. In state championship competition, he earned one gold and three silver medals in individual Epee, two golds and a bronze in team Epee, and a share of a state team title.”