Home >
About Us > Our History
Page tools : 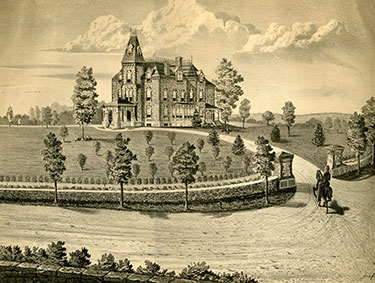 The Xaverian Brothers founded St. John's in 1907 and their spirit burns as brightly now as it did a century ago, and it is their commitment to faith, service, and brotherhood that continues to inspire our mission today. We hope you will enjoy this brief history of St. John's, from our earliest days to our dynamic present. And when you visit the Prep, stop in Xavier Hall to explore the stunning photo mural museum of Prep history that was created to celebrate our Centennial year.

In 1891, the Xaverian Brothers purchased the Jacob Spring family estate, a beautiful property that included 100 acres and three buildings, for $19,500. At this time, the Brothers began St. John's Normal College for young men aspiring to become members of the Congregation of the Brothers of St. Francis Xavier. Built in 1880 by Jacob Spring and pictured above, Porphyry Hall now serves as the Administration Building. The Xaverian Brothers purchased the Spring estate in 1891 and established St. John's Normal College the same year. The school shifted its mission to the secondary level and St. John's Prep opened on September 10, 1907.

In 1907 Brother Benjamin, with seven fellow Xaverian Brothers, founded St. John's Preparatory College for young men. The vision was simple: "the full and harmonious development of all the faculties that are distinctive of a person recognizing that learning is an instrument of education, not its end."

According to records, the Headmaster-Principal leadership model that serves us well today has been in effect from the start. While Brother Benjamin guided the administrative finances and construction projects, Brother Thomas conducted St. John's toward a path of academic excellence.

Brother Benjamin's building program began in the fall of 1907, with construction of a wood frame gymnasium, which housed the basketball team until the early 1950s. In 1908, the chapel was added to the rear of the Administration Building. To keep pace with school growth, Xavier Hall was built 1910-1911. It housed 16 classrooms, a library and reading room, a study hall, and an assembly hall, as well as 50 private rooms and a dormitory room for about 80 beds. In 1916, with the resident population rising to 230 and an additional 100 "day hop" students, Ryken Hall opened, named after Theodore James Ryken, founder of the Xaverian Brothers. The building housed 150 students both in private rooms and in an open dormitory. The academic wing contained six large classrooms, study halls, club meeting rooms and recreational facilities. Today the residential wing is gone but the academic wing houses our thriving Ryken Center for the Arts. Read on for more history..>>