when life gives you lemons, make a podcast

With a campus visit by environmentalist Bill McKibben postponed by the pandemic, five industrious students parlayed a remote interview with the activist into a fully produced podcast.

sjpmission&research · Cleaning the Nest: Investment, Divestment, and The Prep Community

In lieu of an on-campus appearance, this fall’s Brother Sullivan, C.F.X. Lecture Series speaker Bill McKibben, a world- renowned environmentalist, author, and journalist, happily agreed to mark the day in a different way: an interview with a small group of St. John’s Prep students.

Five Middle and High School students—Jacob Garland ’21, Ansh Motiani ’22, Kique Ruiz ’22, Tiger Zhang ’22, and Magnus Julin ’25—teamed up with the four directors of the Center for Mission and Research to turn the interview into a podcast episode, complete with soundbites from conversations with faculty and staff members from around campus. 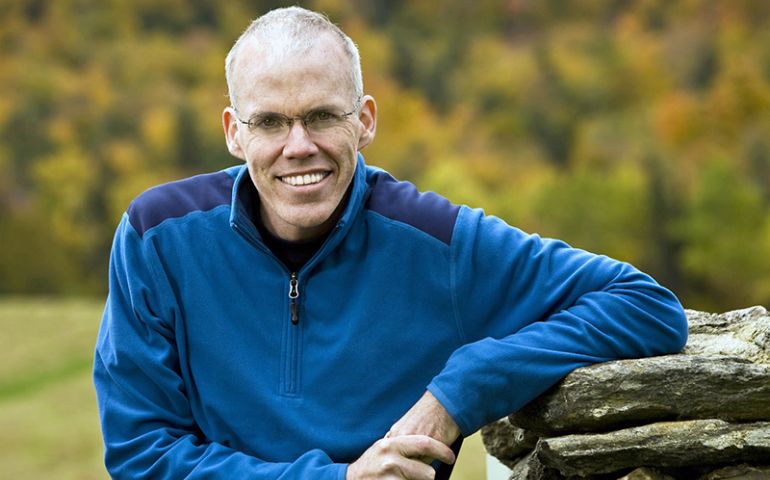 Author of a 1989 seminal book about climate change, McKibben owns a scroll-like resume in the arena of environmental advocacy. Co-founder and senior advisor at 350.org and the Schumann Distinguished Scholar in Environmental Studies at Middlebury College, McKibben was one of the earliest to sound the alarm about greenhouse gas emissions and global warming. His recent work is focused on divestment, or relocating financial resources away from fossil fuel companies.

Given the group’s many questions and McKibben’s limited bandwidth to answer them, Garland, Motiani, Ruiz, Zhang, and Julin met weekly to prepare, choosing divestment as the theme of their interview.

“We wanted to ask questions he might not necessarily have answered before (from members of the public),” says Ruiz. Zhang adds that they were conscious of time and made an effort to craft highly relevant questions.

Ultimately, the group settled on five themes: 1) Energy companies’ transition from fossil fuels to clean energy and how divestment would impact them; 2) Correlations between the anti- apartheid movement of the 1990s and the fossil fuel divestment movement now; 3) Contrasts between modern environmental movements and those of the 1970s; 4) Divestment’s impact on the common citizen; and 5) A vision of a future world if humankind were able to meet McKibben’s goal of 350 parts per million of Co2 in the atmosphere.

For some of the students, this marked their first formal interview. But they report that despite his international standing, McKibben was more than willing to have a conversation, convey information, and impart some words of advice.

“Bill was friendly, engaged and ready to answer our questions,” says Garland. “It felt like a conversation between peers. He was there for the beginning of this movement and knows so much of the history. He was really willing to share that experience with us.”

Motinai reflected on the use of Zoom as the platform for the interview. “You really get to focus on the speaker. With Bill, it was like talking to someone you’ve known for a long time. It was very conversational.”

The group’s Middle and High School blend is uncommon at St. John’s. For Zhang, working with a diverse group of ages was a plus. “Everyone brings a different perspective,” he says. “There were a lot of good ideas, and working with a group is a great change of pace. Everyone involved is capable, dedicated, and passionate.”

For Julin’s part, he found it “a little interesting” being the youngest member, but the High Schoolers are quick to affirm his contributions to the group. “Magnus contributed to the group just as much as anyone else,” says Ruiz. “I certainly wasn’t this involved when I was in eighth grade!” adds Zhang.

For as casual and friendly as the conversation was, each of the five students have more formal and tangible reasons for being active in environmental justice issues. “For me, it’s two things,” explains Garland. “First, the incredible urgency with which we need to address these issues, but second, is a level of hope. We are facing an existential crisis, but have an incredible opportunity to learn from the people who came before us so we can solve this issue.”

Julin, Montiani, and Ruiz concur with the need for speed. Zhang and Motiani have also lived and traveled abroad and have seen the effects of climate change, firsthand. Impacts which might not be as obvious for those living in the Northeast United States. Motiani expresses the genuine sense of individual responsibility he feels. “We are the generation that has to take care of the earth. And it’s our responsibility to care for those who are feeling the effects of climate change the most.”

At the end of the interview, Mr. McKibben challenged the group to communicate and apply the information discussed to their own communities. Garland sees St. John’s as a crucial player in the equation. “After all, this conversation extends beyond just the topic of divestment,” he says. “If we want anything to really change for the better, we have to start with ourselves and our communities.”