At St. John's, good knows no bounds. It's greater than great academics. Here are snapshots of what it means at the Prep. Something amazing happens when you're open to good!

The Ties that Bind

It’s not every day that a student-athlete breaks a school record. In fact, it took 11 years for the St. John’s Prep 50-yard freestyle swim record to fall. But Mitchell Lockwood’s spectacular sprint did a lot more than prompt an update to the Eagles all-time record board hanging in the John A. Driscoll ’90 Aquatics Center. In a hearthwarming example of how fully St. John’s is, all at once, a school, a family and a worldwide network, Mark Scalise ’08, the alumnus whose time Lockwood eclipsed, took time away from running his own business to make a surprise congratulatory phone call to the stunned senior. 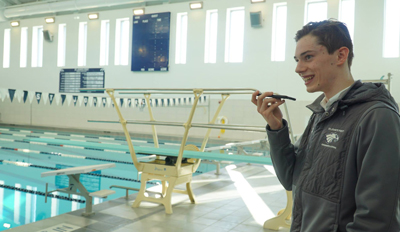 “That was an amazing experience,” said Lockwood after the call from Scalise. “I will remember that for the rest of my life. Even though I have never met Mark, I already felt like I knew him because of how long I’ve been eyeing that record. It means a great deal to me to be on that wall with student-athletes who are not just great swimmers, but great people. That fact that Mark took the time to call me says so much about the Prep brotherhood. This team and this school have deep traditions that build an incredible alumni network. I look forward to the day when I will be able to call a future prep swimmer and congratulate him on beating my record.”

Scalise, a graduate of Harvard University and Harvard Business School, along with the young man who vanquished his record weren’t the only ones to get a kick out of the conversation.

“That call was especially enjoyable for me because I watched Mark set that record as his teammate, and also got to watch Mitch better it,” said Jeff Fiore ’08, St. John’s aquatics coordinator and assistant varsity swim coach. “Mitchell set a great example to his teammates all year long. He’s a well-rounded swimmer and he had a lot of options for what to race at the state championships, but he made choices based on what would give us the best shot at winning the meet, which speaks volumes about him as an athlete and the culture of our team. I know Mark was proud to talk to him.”

Simply by picking up the phone, Scalise demonstrated the deep connection that emerges from the shared experience of a St. John’s education. Students and graduates, alike, often speak about an implicit bond that forms between and among the Prep students. A palpable sense that they are there for one another, hold each other accountable, and lift each other up to embody a collective support system. Clearly, this sense of brotherhood stays with students long after graduation day.

For the record—pardon the pun—Lockwood actually broke Scalise’s record twice en route to the Eagles winning their fourth straight (and 14th in 19 years) Division 1 swimming and diving state championship. At last month’s North Sectional championships, Lockwood touched the wall first in 21.45 seconds to outpace the 21.51 swum by Scalise, whose time was the Prep’s longest-standing swim record entering the meet. Eight days later, Lockwood earned silver in the 50 free at the state championships, breaking his own new record by clocking a 21.35.

For his part, the self-deprecating Scalise seemed downright thrilled to pass the torch. “I’m glad to see that record has finally fallen,” he said. “That’s awesome for Mitchell. Records are meant to be broken, so if mine sitting up on that board motivated him in some way, all the better. Honestly, I think it stood so long only because the St. John’s coaching staff puts kids in the best position for the team to succeed rather than focusing on standout individual performances and records."

Perhaps Mitchell Lockwood said it best: “When I was talking to Mark, it felt like I was talking to any of my other Prep brothers because we all know what it means to go to this school and to be there for one another.”
Posted by Mr. Chad Konecky in Character and Leadership, Student Life on Tuesday March, 12, 2019 at 01:13PM
Like
0

Choose groups to clone to: