At St. John's, good knows no bounds. It's greater than great academics. Here are snapshots of what it means at the Prep. Something amazing happens when you're open to good!

When it comes to managing young adults’ screen time, Kerry Gallagher, the Prep’s Assistant Principal for teaching and learning, says schools and parents are best served by clear and open communication maintained on a regular basis. At home, agreeing on a set of expectations is a terrific foundation, but routine check-in conversations can be invaluable to maintaining healthy behavior when it comes to balancing screen time with general productivity, wellness and overall face-to-face engagement. 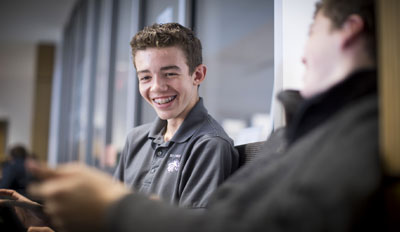 NOT ALL SCREEN TIME IS CREATED EQUAL

“If a student is using screen time to video chat with a classmate about an assignment, in my view, that’s no different than collaborating in person,” says Gallagher, a TEDx and keynote speaker who also serves as Director of K-12 Education for ConnectSafely.org. “The same goes for using a screen to research, write, and edit video or audio—either for school or as a hobby.”

The types of screen activity that adults should be more conscious of are things like passive scrolling or chain-watching YouTube videos. “Even video games fall somewhere in the middle between constructive, educational screen use and inactive viewership. Video games can involve teaming up with a friend, strategizing, playing while working together. It’s not optimal if it’s prolonged, but hard absolutes in any of these realms—like a no gaming rule—aren’t likely to be a productive or realistic over the long run.”

Parents shouldn’t hesitate to set common sense rules that work for the family, according to Gallagher. “One of our family rules is that you shouldn’t have your earbuds in listening to music or your eyes glued to a screen when we're in the car together,” she says. “Talk to your brother or sister, engage, have a conversation. Debate what song to play next. In other words, natural human interaction.”

MAKE IT AN ONGOING CONVERSATION

An important guideline for managing young adults’ screen time is basic, but worth spelling out: It’s going to require more than one conversation. Keep the discussion honest, open, goal-driven and continual. Steer clear of starting the dialogue in moments when screen time has become a friction point.

“With my own kids, I usually start this conversation with something like this: ‘It seems like you really enjoy X or Y on your device, however, the amount of time you’re spending on it concerns me,” says Gallagher. “I never start that conversation once I’ve become exasperated. I find that a great time to do this is when we're  in the car. The conversation allows you to start re-calibrating the behavior and begin working toward a middle ground.”

Maintaining balanced, healthy screen habits also requires regular check-ins. Don’t let backsliding go unnoticed, and call out instances specifically. “It’s important to be intentional about it,” says Gallagher. “It can be as simple as, ‘We talked about this, and I’m wondering how you think it went this week?”

What’s more, she says, if an agreement applies to everyone—for example, no phones at the dinner table—any adult who doesn’t comply needs to fess up and own it.

At the Prep, students were recently asked to update their iPads to iOS12. This generation of software offers a feature called Screen Time. It allows parents to access reports showing how much time is being spent on certain types of activities or in specific apps. Viewing these reports on a regular basis with students presents an opportunity to talk about how they’re using their device.

In addition, if a student’s Apple ID has been enrolled in Family Sharing, parents can schedule downtime when a device can’t be used, or set time limits for particular apps or types of apps. Certain content and privacy restrictions can also be delineated. These parameters can even be be synced across multiple devices using the same Apple ID.

Gallagher emphasizes that a one-size-fits-all plan for managing screen time probably doesn’t exist. Moreover, it can be a moving target to develop and sustain a coherent strategy for setting limits in a world of technology where a student’s device is their entertainment, their homework, and their encyclopedia. The fact remains that research consistently supports the idea that the use of technology carries enormous educational benefits. By the same token, “there is such a thing as ‘too much of a good thing,’” says Gallagher. Ultimately, parents should strive to equip their children to enter adulthood with a healthy set of expectations for how to use—and, in certain cases, avoid—technology.

Choose groups to clone to: