<Back to News
A Twist in Time

St. John’s held a graduation event like no other during a time like few others on Sunday. At the school’s 110th Commencement exercises, Headmaster Edward P. Hardiman, Ph.D. conferred diplomas upon 263 seniors during an outdoor ceremony held on the school’s campus. Abiding by mask and social-distancing requirements, parents, relatives, faculty, staff, and alumni populated spaced seating on Cronin Memorial Stadium’s Glatz Field turf for the ticketed event. More photos on SmugMug.

In his remarks to graduates, delivered under partly cloudy skies, Dr. Hardiman captured the unprecedented blend of joy and solemnity of an uncommon occasion set against the backdrop of extraordinary times. 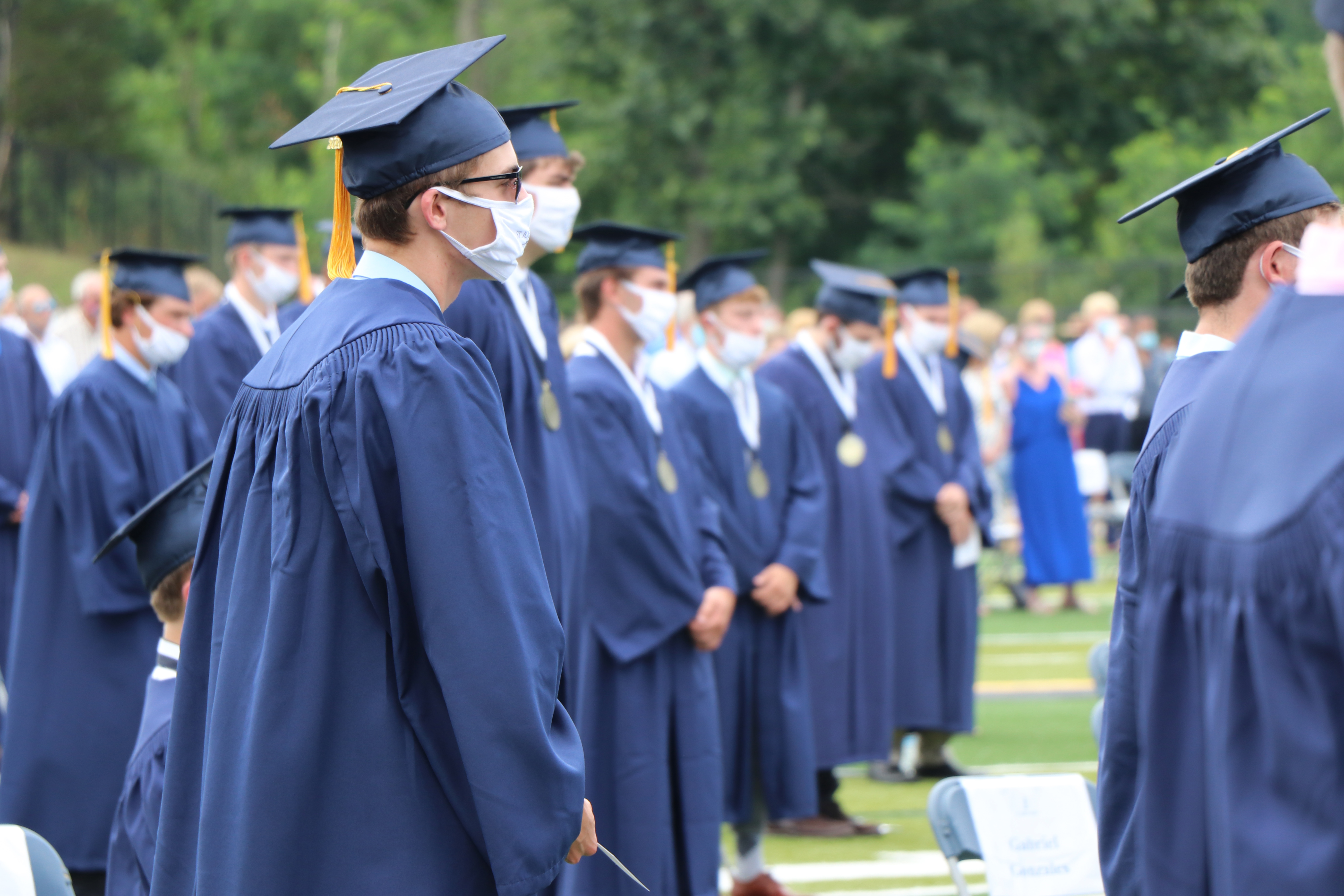 “There are many challenges and obstacles in our world, and many more opportunities if you can keep an open mind and heart to see them,” he said. “We are facing two pandemics today: COVID-19 and racism. Both pandemics illustrate an unfulfilled need for every talent you possess—be it the gift of creativity and innovation, scientific curiosity, social justice advocacy or any of so many others. Those talents will create better days ahead. At the risk of putting too much pressure on you, I believe the Class of 2020 will be the ‘X’ factor. You will fill those unfulfilled needs of our world, and you will be the change we need to see in the world.”

In lieu of the traditional processional across campus, attendees were admitted by staggered arrival times and according to a limited capacity as prescribed by guidelines from the Commonwealth. Graduates were issued four tickets each to invite immediate family to the 84-minute ceremony.

North Andover’s Sean McDonald ’20, president of the student council, offered the invocation, leading those assembled in a prayer entreating God to “help (graduates) nurture what we have learned here at St. John’s Prep: to respect differences and embrace diversity in others … help us to speak up for those who have no voice, act for those who are unable, and provide for those in need.”

This year’s graduating class featured co-valedictorians Mitch Robson of Marblehead and Drew Bouchie of Rockport, while the salutatorian medal went to Zekai Lin, a native of China. Owen Gaffney of Beverly received the Xaverian Award—the highest honor the school can bestow upon a graduating senior—presented to the class member who best epitomizes the values and tradition of Xaverian education. 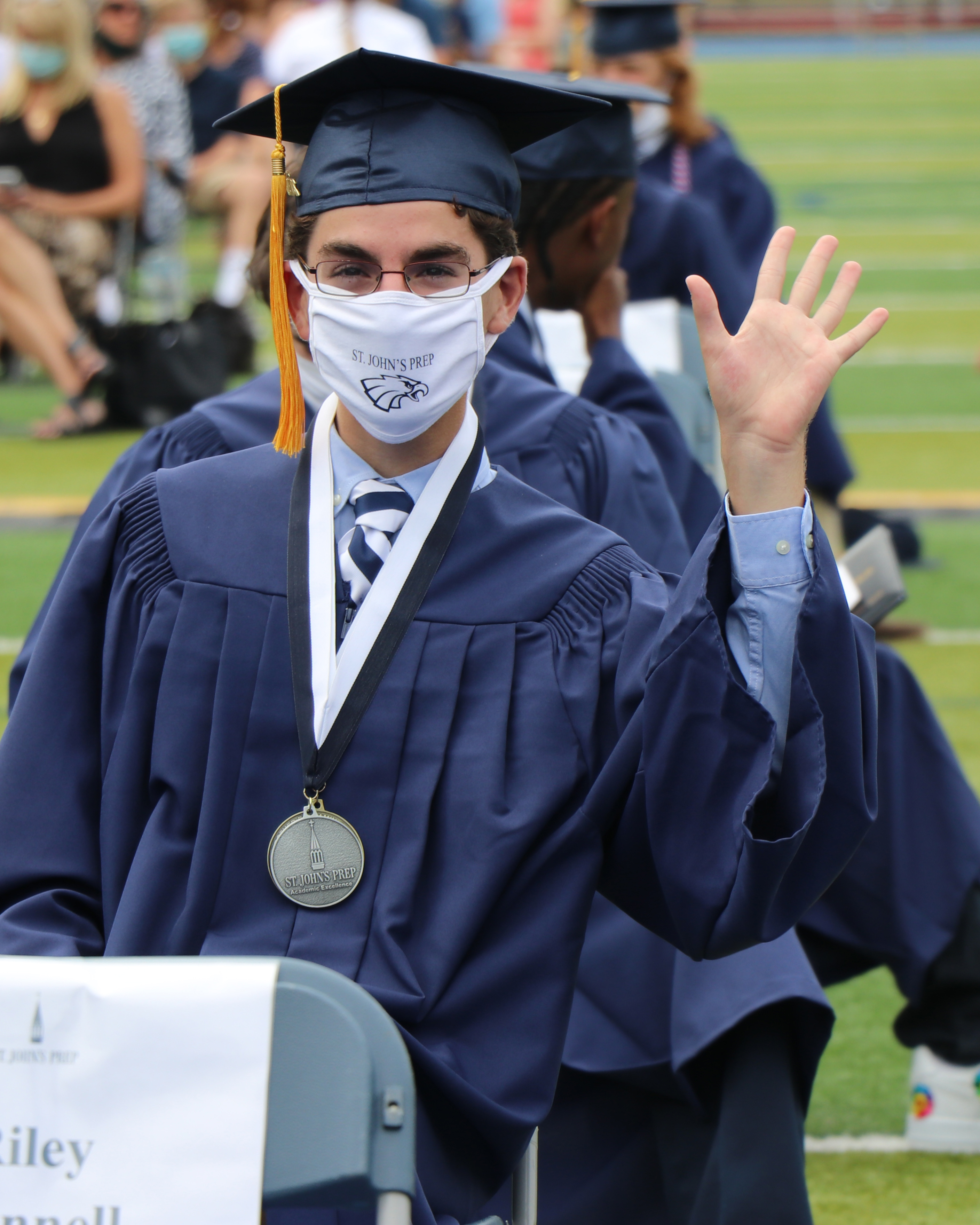 In his co-valedictory address, Robson urged his classmates “to carry the best the school has given us by living the values we have learned here.” Robson, who will attend University of Chicago on a Coolidge Presidential Foundation scholarship and pursue a double-major in physics and molecular engineering, reflected on his belief that all new graduates need to stay hungry for self-improvement. “Many small moments throughout my time at St. John’s served to hone my strengths and create new ones, and I’m confident you all had similar experiences,” said Robson, graduated St. John’s with 4.66 GPA. “We should take pride in our accomplishments, but we should not rest. We are still unfinished.”

Nearly 55 percent of the graduating seniors are members of the National Honor Society, while nine were National Merit Scholar-commended students. There were 22 legacy graduates, meaning their father, grandfather or great grandfather also graduated from the Prep.

College acceptances for the class included four Ivy League schools as well as Duke, Georgetown, Howard, Marquette, Notre Dame, Tufts, Williams College, New York University, Northeastern University, Northwestern University, University of Michigan, UCal-Berkeley, all four schools in the UMass system, and the University of Virginia, among 218 total institutions to date. Graduating Eagles will fly away to locales as far west as California, as far north as Canada, as far south as Texas, and to many states in between, including Alabama, the Carolinas, Florida, Kentucky, Georgia, Indiana, Ohio, Wisconsin, Pennsylvania, and Minnesota, among others.

Bouchie, the co-valedictorian, used his time at the podium to implore his classmates to remain open to change in a rapidly changing world. “Whether you’re moving on to college, taking a gap year, starting a new job or simply entering uncharted domains, keep your minds open to the possibility of change,” said Bouchie, who will attend Boston University to pursue a degree in mechanical engineering and graduated St. John’s with 4.68 GPA. “Now, every day provides new unknowns. Exploration on everyone’s part, will be a necessity to provide a light at the end of the tunnel. Push yourself. Meet new people. Find what unique thing brings you fulfillment.”

Sunday’s ceremony was the Prep’s second salute to its 2020 graduates. In recognition of the unprecedented challenges this year’s graduating class experienced as well as those students’ unique capacity to meet the moment, St. John’s Prep hand-delivered diplomas to its graduating seniors in May. The journey spanned 15 days, covered 1,044.5 miles, endured approximately 200 hours, and traversed 64 cities and towns across two states. Making the initiative even more meaningful, 112 faculty and staff members volunteered to personally attend individual diploma drop-offs for every single graduate. In all, Prep faculty and staff combined to make more than 500 visits to individual diploma deliveries.

In the closing moments of the ceremony, Dr. Hardiman evoked the words of the School’s late 2003 alumnus Peter Frates, the Beverly man who changed the trajectory of the search for a cure for amyotrophic lateral sclerosis (ALS) by sparking a cultural phenomenon in popularizing the Ice Bucket Challenge. Hardiman called upon the Class of 2020 to experience the challenges ahead with faith in their level of empowerment.

“Let me leave you with a reminder to live Pete’s credo each day: ‘Be passionate, be genuine, be hardworking, and don’t be afraid to be great—even in the face of adversity.’”

At 10:29 am, the new Prep alumni turned the tassels on their mortarboards from right to left, signifying the official conclusion of their high school experience. 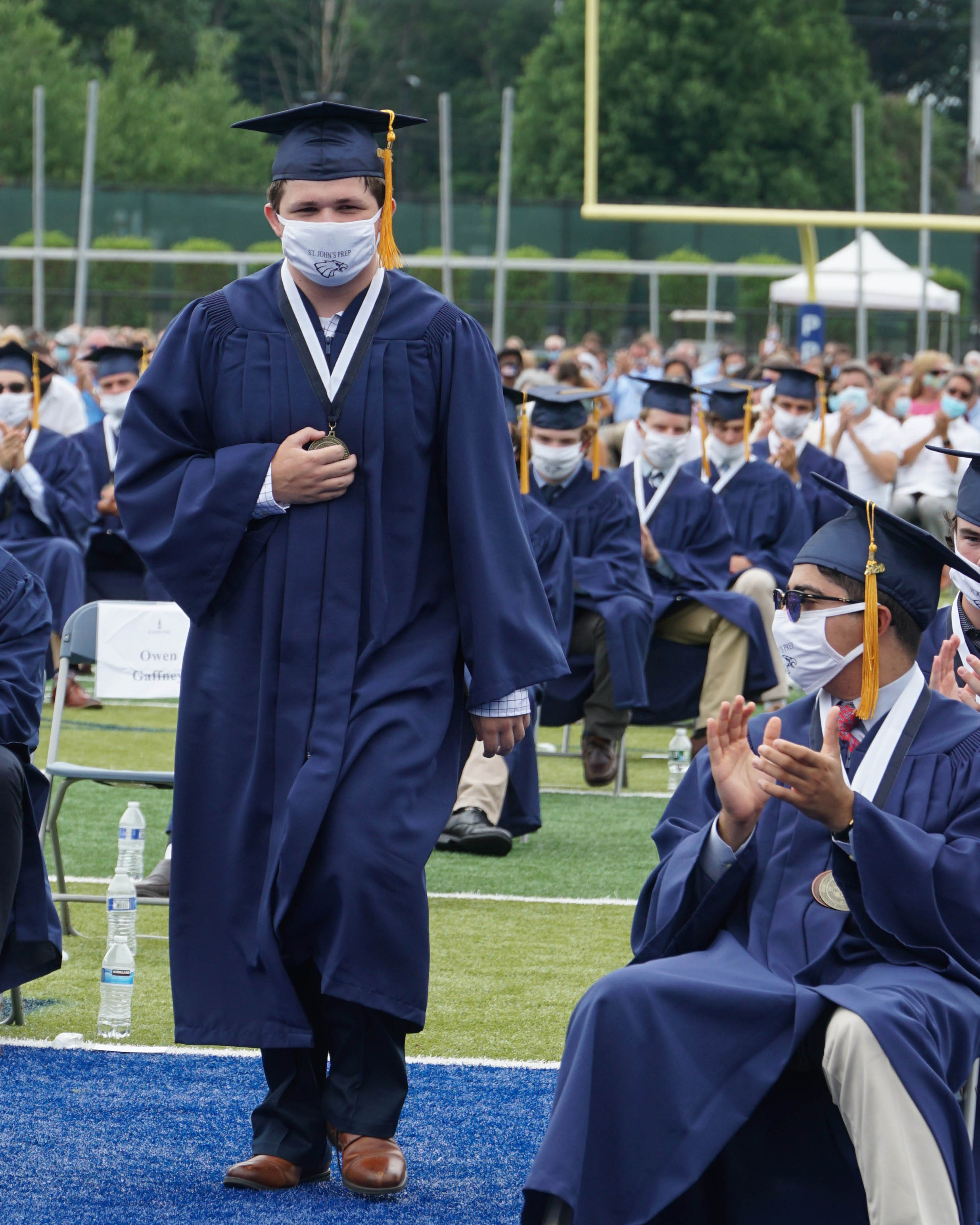