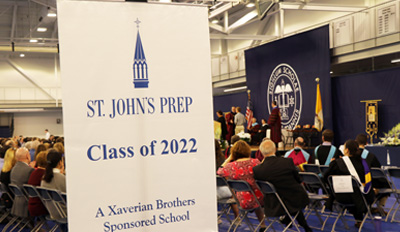 During the Freshmen Awards Convocation on Tuesday, May 21, St. John's honored members of the Class of 2022 for outstanding achievement in leadership, academics, co-curricular activities, and athletics. Congratulations to all! Pictures on SmugMug!

Ethan Peralta received the 2019 Brother Linus, C.F.X. Scholarship Award, which is presented to a freshman, who in the eyes of his teachers, is an outstanding individual and student who, in his first year, has displayed a model of academic achievement and involvement in school activities. The award, now in its 38th year, is given in memory of Brother Linus, C.F.X., a St. John’s religious studies teacher, counselor, golf coach, hockey coach and freshman football coach until his death in 1977.

Charles Wilmot received the Brother Stephen and Brother Francis Award, which honors two Xaverian Brothers who were responsible for the legacy of Xaverian education in the United States. As the young congregation faced challenges, the General Superior was forced to call the first Brothers back to Europe. Brother Stephen and Brother Francis remained behind and persevered in their ministry to serve the Church in Louisville. They inspired others through their leadership and commitment to life of faith, service and education. Soon other men joined the Congregation and the work of Stephen and Francis. Through the establishment of this award, the St. John’s community honors one student in each grade who follows the example of Brothers Stephen and Francis through his zeal, compassion, humility, trust and simplicity as he commits himself to excellence and falling in love with the service of God in the midst of the Prep community.

Owen Reynolds received the Steven Bekel '12 Award. This award is named in memory of Steven Bekel, a member of the Class of 2012. Steven and his father William died tragically in an automobile accident in May 2009. The Bekel family’s loss was shared by their many friends in the Danvers and St. John’s Prep Community. The Class of 2012, then just freshmen, bonded together and have kept their lost classmate in their memory with a series of ongoing events and fundraisers. This scholarship is presented annually to a rising sophomore from Danvers who is an accomplished student and who is also involved in the extracurricular life of the school. St. John’s was honored to have Steven’s mother, Nancy Bekel, his uncle, Jim Sears ’81, present the award.

Conor Beswick received the Campus Service Ministry Award. This honor is presented to a member of the class who has consistently and authentically participated in Campus Ministry events throughout their time at the Prep and who embodies the mission of Campus Ministry and St. John's by engaging with the community and demonstrating what it means to be a person of faith and action.