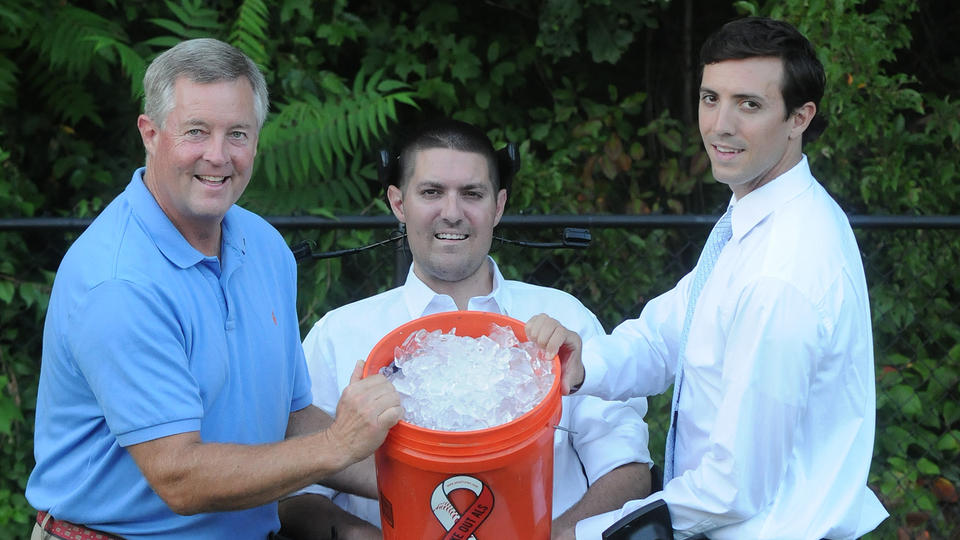 St. John’s Prep is proud to announce Pete Frates as its 2018 Distinguished Alumnus, and is celebrating him with two accompanying first-ever school accolades.

Headmaster Edward P. Hardiman, Ph.D. revealed the trio of honors at a morning news conference held on campus on Wednesday, August 30. The full celebration of Frates’ scope of achievement will include the dedication of the Prep baseball diamond in his name and the retirement of his No. 3 jersey, the first retired number in the history of Eagles athletics.

“There are so many layers of heroism within Pete’s story,” said Dr. Hardiman. “He is an amazing role model of resilience, perseverance, inspiration and servant leadership. His family is a model of how people come together to support one another. Today is a testament to how much we believe that Pete exemplifies what we want our students to emulate in their own journey.”

A three-sport standout in football, baseball, and hockey at the Prep, Frates played four years in center field at Boston College and captained the BC Eagles as a college senior in 2007, graduating with a bachelor’s degree in communications. In March 2012, at the age of 27, he was diagnosed with amyotrophic lateral sclerosis (ALS, also known as Lou Gehrig’s disease).

Frates has battled the disease for more than five years and sparked a cultural phenomenon by popularizing the Ice Bucket Challenge, which went viral on social media during the summer of 2014. The Beverly native ultimately inspired unprecedented fundraising in the search for a cure. Multiple charitable initiatives in association with “Team Frate Train” and Pete Frates #3 have raised more than $220 million worldwide. Now a part of the Prep’s Distinguished Alumnus Award legacy, Frates joins a list of previous honorees that includes educators, corporate executives, a Catholic Bishop, and an active NFL head coach, among others.

“What a tremendous honor that I humbly accept from the school and community I love so much,” said Frates, who teamed up with the ALS Association this spring to create the Peter Frates Home Health Initiative, an organization that delivers in-home caregiving assistance to individuals suffering from ALS in Massachusetts. “As I read the Headmaster’s letter that delivered the good news, the tears started to flow. There is no way I could ever express how unbelievably thankful I am. I gratefully accept this honor on behalf of my entire family, especially my parents, who worked so incredibly hard to put me and my brother Andrew through the greatest prep school in the country. Go Eagles.”

In recognizing an annual Distinguished Alumnus, St. John’s honors a graduate whose life exemplifies the spirit and values the school seeks to instill in all of its students. Established in 1993, the award celebrates individuals who demonstrate a commitment to faith, family and service; who have achieved professional success; and who have made significant contributions to society as volunteers, mentors or benefactors.

The Frates family’s connection to St. John’s runs deep with a legacy that includes Pete’s father, John, who is a 1976 graduate, and his brother, Andrew, a 2006 graduate.

Frates’ No. 3 jersey will be officially retired by the Prep in the sports of football, hockey and baseball during a home football game under the lights on October 20. The ceremony will also formalize the dedication of the varsity baseball field, which will be designated the “Pete Frates ’03 Diamond.”

“Pete has given his time and his talent, and he and his family have been game-changers in the lives of others,” said Dr. Hardiman. “That’s something we want to recognize as a school. It’s just part of telling his story. Five or 10 or 15 years from now, when No. 3 is behind the hockey bench, or at Cronin Stadium, or painted on the baseball diamond for student-athletes to know that story, I think it will give them a deeper understanding of who they are and who they want to become.”

Approximately 30,000 Americans are diagnosed with ALS, sometimes referred to as Lou Gehrig’s disease after the New York Yankees first baseman who died age 38 in 1941. ALS is incurable and progressive; most patients are men between the ages of 40 and 70. There are about 5,000 new diagnoses annually and 10 percent of cases are hereditary.

The ALS Association has confirmed that research funds from the Frates’ social media campaign directly supported the 2016 discovery of a gene (NEK1) that could lead to new treatments for the family of ALS diseases. Earlier this month, the U.S. Food and Drug Administration (FDA) released a new medication to combat ALS for the first time in 22 years. The agency fast-tracked approval of the drug Radicava in May, demonstrating the wide-ranging impact of the movement Frates catalyzed.

On August 18, Governor Charlie Baker signed an act that declares the first week of every August “Ice Bucket Challenge Week” in Massachusetts. On September 5, ForeEdge Books will release “Challenge,” a new book about Pete Frates, his family, and how they inspired the 2014 Ice Bucket Challenge. The book is written by New York Times best-selling author Casey Sherman and Dave Wedge, who co-wrote “Boston Strong.” Sherman is also known for the book “The Finest Hours.”

Frates was named Sports Illustrated’s Inspiration of the Year in December of 2014, and the ESPN SportsCenter documentary charting his journey was nominated for an Emmy. Boston College retired Frates’ No. 3 jersey in 2016, and last fall, Endicott College, in his hometown of Beverly, named a dormitory after him. Also the recipient of the 2017 NCAA Inspiration Award, Frates was honored at Fenway Park this spring when the bucket he used for his own Ice Bucket Challenge in 2014, along with memorabilia from his playing days at BC, were donated to the Baseball Hall of Fame in Cooperstown, N.Y.

A Catholic Conference All-Star in football and baseball at the Prep, Frates was part of two conference championship teams in each sport and also earned Catholic Conference Honorable Mention recognition in ice hockey. He resides in Beverly with wife, Julie, and their three-year-old daughter, Lucy.

Pictured: Pete with his father, John '76, and his brother, Andrew '06. Photo courtesy of Boston Herald.